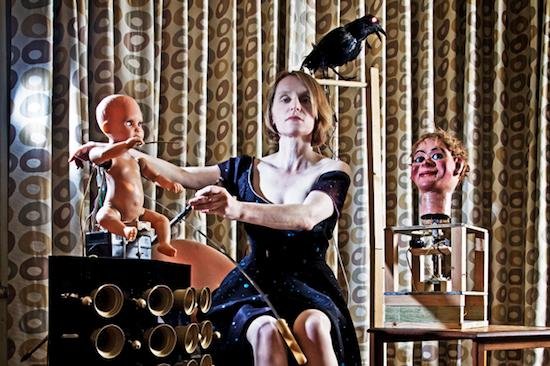 Sarah is a composer making dreamlike performances where the total theatre of the sound’s creation is as striking as the music itself. Her music reflects her eclectic background as a classically trained composer, electronic artist and folk musician.

A prolific live musician, Sarah’s known for her skills and augmented techniques on theremin, an instrument she combines live with Max, vocals, recorder, saw, keyboard and her many found sounds and field recordings. On stage, she’s often accompanied by musical automata – machines she’s been devising and building since 2005 to give her performance an arresting and uncanny physical presence. Thematically, she often plays with the resonances between folklore and our perceptions of machines. Her music often plays with notions of electrical mysticism and the uncanny.

“A highly atmospheric and compelling listen…drawing on a dense skien of real pasts and imagined futures to talk lucidly and provocatively about the present...the record feels like a whole universe until itself, brimming with fresh propositions and new directions…Ealing Feeder is a subtle gem.” Robert Barry, The Wire, London