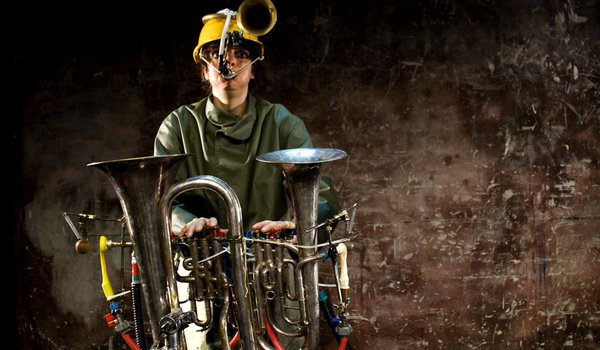 Sarah Kenchington lives on a farm in the Campsies, and for the past 10 years has been developing  an elaborate and constantly evolving semi mechanical orchestra. Made from strictly human powered, mechanically assisted, acoustic instruments, this orchestra is designed to be played by one person and creates music that is dictated, in part, by the uncontrollable nature of the instruments in this set up.  These include a pedal powered double ended hurdy gurdy/banjo,  a pyramid structure that plays crystal glasses,  a mechanical sequencer, and a brass band section which uses balloon membranes.

UK and international performances include Sonic Protest Paris 2017,  Tusk Newcastle 2016, Tectonics Reykjavik 2015, Supersonic Birmingham 2014, Suoni Per Il Popolo, Montreal 2012.
Public Commissions include Wind Pipes,  Edinburgh Arts Festival 2013, a hand pumped pipe organ designed to be played by twelve people at once.
Sound House, for the Museum of Modern Art in Oxford 2009, an instrument made from a council house.

On Another Note
Short documentary film by Emma Dove about the Pedal Powered Orchestra
shootingpeople.org/watch/108398/on-another-note

The Bellow Switch
CD information including music, images and details about instruments.
www.myspace.com/paddenkenchington

Exploring unmaking as a form of resistance